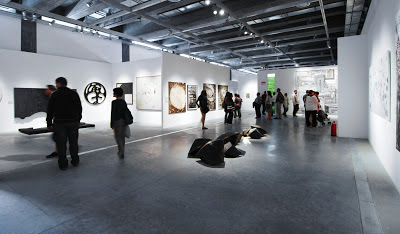 İstanbul's new contemporary arts museum Santralistanbul, founded by İstanbul Bilgi University on the shores of the Golden Horn, had its pre-opening exhibitions earlier this summer. The institution, which then stated it would be in full swing in September, opened its doors Saturday night with considerable attendance to its opening exhibition titled "Modern and Beyond." However, not everything went as planned.

After all of the anticipation for the grand opening, neither the scheduled speeches nor a formal opening of the exhibition took place. Guests were able to roam through the exhibition area to their hearts' content while they wondered what had happened to the scheduled program. The visitor makeup ranged from children to the elderly and members of the public to artists. Most seemed quite satisfied with the evening despite the predicament of the program. Some said they came as part of a Saturday tour while others were there to study crowd dynamics.

Though we cannot foresee how locals will react to Santralistanbul in the long term and what effect this new contemporary arts center will have on its surrounding area, it is certain that Santralistanbul has already helped to revive the region. Despite the fiasco of the opening night, art lovers still got what they came for with the "Modern and Beyond" exhibition.

Curated by a committee with Fulya Erdemci, Semra Germaner, Orhan Koçak and Zeynep Rona, "Modern and Beyond" covers the 50-year-long history -- from the 1950s through to the 2000s -- of the contemporary art scene in Turkey. About 450 works by over 100 artists and artist groups are located throughout the three floors of Santralistanbul. On the first floor are the works of cornerstones in Turkish art such as Bedri Rahmi Eyüboğlu, Sabri Berkel, Fahrelnissa Zeid, Fikret Mualla, Abidin Dino, Şadi Çalık, Cihat Burak and Erol Akyavaş. The second floor hosts pieces by names such as Füsun Onur, Sarkis, Balkan Naci İslimyeli; the third floor shows works by Hüseyin Alptekin, Hafriyat, Haluk Akakçe and Serkan Özkaya.

The exhibit, which brings together works from approximately 50 museums, foundations and private collections, aims to re-evaluate Turkey's modernization process, relating it to today and opening a new debate on it via art.

Together with paintings and sculptures all showcased in chronological order, the exhibit also incorporates genres such as photography, video, installation and new media art -- artwork created with new media technologies such as computer graphics, animation and the Internet. The works in the exhibition were picked in an effort to show the phases of development of the artists as well as the evolutions in contemporary art. Art lovers should definitely visit "Modern and Beyond," which will run through Feb. 29, 2008. Make sure to schedule in a decent block of time to see such a comprehensive exhibition.