Yüksel Arslan returns to his homeland 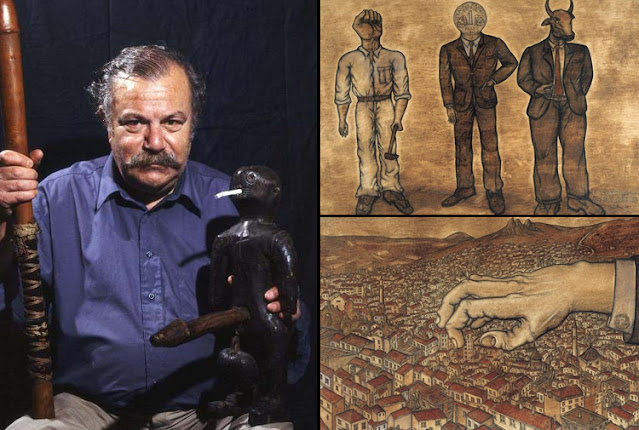 Paint in tubes seemed artificial to him. It was as though the soul of a muralist from a very old age had in some way mixed with his. He was constantly seeking colors he could call his own. One day, during his search for the natural, he found a formula in a book about prehistoric art. The writer of the book he bought from a bookstore at İstanbul's Tünel whispered into his ear the formula he had been searching for a long time. Everything was very clear; there he had a list of natural ingredients: soil, honey, egg, bone marrow, soap, herbs, oil… He mixed up the ingredients and boiled the mixture to make his own paint, he then applied the mixture to paper and glazed the paper with flint. He defined the contours of the figures with a sharp pencil; he painted his works with soil paints and Indian ink. Inspired by old bookbinders, he treated his works with water in which tobacco had been boiled to protect his works from insects. He named his unique style “arture”: a combination of the words “art” and “peinture,” the latter being the French word for painting.

This is why Yüksel Arslan, the 76-year-old Paris-based Turkish artist, does not count himself as part of any art movement. He combines painting, poetry and philosophy in a single medium. His works are not adorned with dreams, but they resemble a world built up of words. Looking at Arslan's works, one can almost hear the sound of a pen moving on paper. The secret behind Arslan's work is hidden in the act of reading, which takes up most of his time. He transfers his musings, as drawings and sketches, into small notebooks -- and there are many of these notebooks.

Turkish author Ferit Edgü defines Arslan with these words: “He likes to draw a picture of a thought; for this reason, the title of ‘painter' does not really fit him. He likes to call himself a sketcher-painter; however, calling him a ‘sketcher-writer' probably more aptly describes his work because he writes as much as he draws.”

Now let's lend an ear to what Arslan says about himself: “I immediately understood in the beginning of the adventure that painting was not an objective, but could only serve as a means for me. I needed to find something else; some other means of expression; something in between painting and writing, or painting and poetry. I can even go as far to say ‘another branch of art'.”

Arslan was born in 1933 in İstanbul's Eyüp district to working-class parents; his father was a factory worker, and his mother was a housewife. He made a name for himself at a rather young age in the small neighborhood called Bahariye where his family lived. When he went to high school, he delved into the magical world of literature. Instead of enrolling in a fine arts academy, he chose to study art history at university. He opened his first solo exhibition in İstanbul in 1955. In 1961 he went to Paris upon a letter he received from Edgü. That was a milestone in his life. In 1970, he settled in Paris and did not return to his homeland -- up until his current retrospective at Santralİstanbul. This is a significant return as Santralİstanbul is located near Arslan's childhood home on the Golden Horn coast.

The retrospective offers an extensive selection from Arslan's work, starting from the 1950s to his present-day artwork, covering both the period before he introduced his “Arture” technique and after. Among the series featured in the show are "Artur(c)s," "The Capital," "An Attempt at Updating The Capital," "Influences," "Autoartures," "Man" and "New Influences," as well as a selection of the thousands of sketches he has drawn while creating these series.

The selection, brought together by curator Levent Yılmaz, features more than 500 works by the artist. Animals, humans, insanity, disease, hardship, poverty, capitalism, spirits stuck in between worlds and the lives of filmmakers and composers all appear as subject matters in Arslan's works, which are assembled in the form of series. Additionally, the collection includes his notebooks and his photographs and correspondence with people who have helped shape his artistic standpoint and intellectual outlook.

Arslan's unique, witty works can be seen until March 21, 2010, at Santralİstanbul.