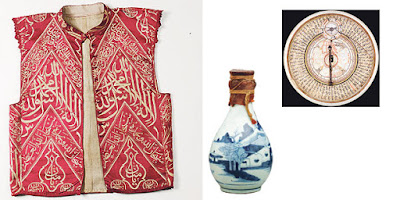 London’s prestigious British Museum plans to stage a major exhibition dedicated to the hajj, the Islamic pilgrimage which annually attracts up to 4 million people to the holy sites of Mecca. Set to open in January 2012, the exhibition, which will display manuscripts, diaries, miniature paintings and photographs among other hajj-related objects, is important because it will be taking place in a largely non-Muslim country, and it is hoped it will contribute to intercultural dialogue. Qaisra Khan, the exhibition’s curator, hopes that “Hajj: journey to the heart of Islam” will strike a chord with a global audience and enable them to deepen their understanding of the hajj pilgrimage and Islam. We talked about the exhibition and his expectations in terms of public response.

How did you come up with the idea for the exhibition?

“Hajj: journey to the heart of Islam” is the last of a three-exhibition series by the British Museum focusing on spiritual voyages. With this series the museum is trying to shed light on different beliefs and cultures around the world, with the aim of encouraging visitors to learn about world religions and broaden their cultural understanding.

Hajj is an Islamic practice, and the exhibition will take place in traditionally Christian country. Anti-Islamism has been on rise in the US since the Sept. 11 attacks and in England since the subway bombing of July 7, 2005. Do you think this exhibition will help counter the British publics’ prejudices against Islam?

We hope that the exhibition will strike a chord with a global audience and enable them to deepen their understanding of the significance and history of both the hajj pilgrimage and Islam, and encourage a dialogue between Muslims and non-Muslims as a positive educational platform between the two. Visitors will learn about the spiritual and cultural phenomenon of the hajj journey and how it has managed to sustain its importance and significance over the years.

Why should people come to this exhibition?

Commenting on the exhibition Neil MacGregor, the director of the museum, said; “This exhibition will enable a global audience to deepen their understanding of the significance and history of the Hajj. In particular, it will allow non-Muslims to explore the one aspect of Islamic practice and faith which they are not able to witness, but which plays such a major part in forming a worldwide Islamic consciousness.”

Who do you think will be interested in the exhibition, “Hajj: journey to the heart of Islam”

It is the kind of exhibition that should really interest everyone. What we want is to see non-Muslims, less informed on the subject, learn about the hajj pilgrimage and see how it is practiced and experienced in different parts of the world.

Neil MacGregor, the director of the British Museum, mentioned that hajj was a cultural issue that should be better understood.

Yes, he did. By displaying works of art spanning different historical periods alongside contemporary art pieces, the exhibition will demonstrate the importance with which hajj has been regarded with worldwide for centuries. It will also focus upon the importance of hajj as one of the five pillars of Islam.

What kinds of works of art will be displayed in the exhibition?

The pieces on display, which we have drawn from both private and public collections, include tiles on which Mecca is portrayed, miniature paintings depicting the hajj journey, a waistcoat made of cloth from the Kaaba, pilgrims’ diaries, historical photographs, zam zam (holy water) bottles, the cloth of the Kaaba’s gate, embroidered with the name of Ottoman Sultan Abdulmecit Khan, an ivory sundial, Qıbla locators and a map illustrating the Kaaba’s position as the center of the world, to name a few. It will also feature the works of contemporary Saudi artists such as Ahmed Mater and Shadia Alem.

A number of pieces from our collection are in the exhibition, yes, including zam zam bottles, manuscripts and contemporary works of art on the theme of the hajj.

Miniature paintings, manuscripts, textiles, historical photographs… Many Turkish institutions hold hajj artifacts in their collections, especially Topkapı Palace. Did you get in touch with Turkish museums and galleries when you were planning the exhibition?

Not specifically with a view to acquiring artifacts, but what is important with relation to Turkey is that the exhibition deals with roads and journeys to hajj, and one of these routes is through Turkey. The works in the exhibition also place emphasis on the role of the Ottoman Empire and Turkish sultans, who were integral in various special rituals of faith relating to the pilgrimage; Mecca and Medina were of course once part of the Ottoman Empire.

What are your plans for the exhibition? Are you considering taking it to other countries, as well?

The exhibition will focus on three things. First of all it will point out the main roads to hajj used through history (From Africa, Asia, Europe and the Middle East). Secondly, it will examine the issue of hajj in the present day, and the rituals of the pilgrimage. Finally it will inform visitors about the origin and the importance of hajj in Islamic history. Regarding displaying the exhibition further afield, this is not something we are considering at the moment, no.

There is a collection of the hajj memories of present-day pilgrims on the website you designed for the exhibition, “Hajj: journey to the heart of Islam.” What reaction has there been to this?

We have received a lot of positive feedback about this part of the project, and we are pleased to see it has aroused a lot of interest. We opened a visitors’ logbook on the website with the hope that we could collect a few memories from present-day hajjis (pilgrims) to compile on a database, but the response far surpassed our expectations, and we were overwhelmed to receive sensitive and moving memories and experiences of hajj from pilgrims from countries all over the world.