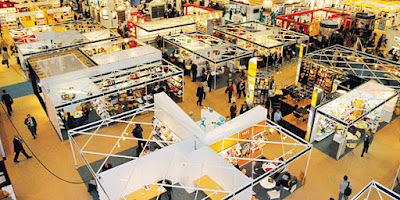 Turkey will be the Market Focus country in 2013’s London Book Fair, an event currently preparing to unroll its 41st edition later this month in the British capital. The 2012 London Book Fair will run from April 16-18 with China as its Market Focus country. Billed by its organizers as a “unique opportunity to explore, understand and capitalize on the innovations shaping the publishing world of the future,” the fair will undoubtedly serve as an additional international boost to the thriving publishing industry in Turkey. According to Alistair Burtenshaw, the director of the fair, Turkey’s tenure in 2013 will be an important occasion for both the Turkish book market and foreign publishers alike, since the fair will turn the spotlight even more to Turkey, which he says has already started gaining more ground in the global publishing industry. In an interview in March, Burtenshaw spoke to Sunday’s Zaman about the Turkish book market and what to expect from the London Book Fair 2013.

How did the London Book Fair decide to host Turkey as its Market Focus partner in the 2013 fair?


The London Book Fair is at the heart of the global book industry and as such aims to focus on key international markets that many publishers trade with or wish to do business with. In selecting our Market Focus territory we look at three key factors: socio-economic, cultural and publishing industry. Additionally, as a UK-based business-to-business fair, we look at countries with existing links to the UK publishing industry. The London Book Fair consults widely with partners and stakeholders in the UK and overseas prior to making the choice of Market Focus country. This includes consultation with our advisory board, feedback from steering committees and the advice of our Market Focus partners, such as the UK Publishers Association and the British Council. We also put emphasis on qualitative feedback from our visitors and exhibitors as part of this process. Nermin Mollaoğlu [of Turkey’s Kalem literary agency] is a great friend of the London Book Fair and she has been a passionate advocate of Turkey being a Market Focus country for many years. We look forward to working with her and many other Turkish publishing professionals to make the 2013 program a success.

China is the Market Focus country of the 2012 fair, following Russia in 2011. Doesn’t Turkey’s tenure in 2013 seem like a belated one?

Absolutely not. We worked closely with the Turkish Ministry of Culture and Tourism, the Turkish Organizing Committee for International Book Fairs and the Turkish publishing community for some years before we officially announced Turkey’s participation as the 2013 Market Focus partner in September 2011. Planning is already at an advanced stage.

Turkey was the Guest of Honor at the Frankfurt Book Fair in 2008. Is that one of the reasons you chose Turkey?

As I have said, we choose Market Focus territories based on three key factors. … Turkey is a great choice as, with over 6,000 bookstores and more than 6,400 publishers with ISBNs, it has a thriving publishing scene and it is now a key international market that many publishers trade with and many more wish to do business with. … Market Focus 2013 will be a fantastic showcase for both the Turkish book market and for publishers outside of Turkey.

Looking from the UK, how do you see Turkey’s book industry?

Turkey’s international profile in the publishing industry has risen dramatically in the last decade, not least due to Frankfurt Book Fair 2008 and Orhan Pamuk winning the Nobel Prize for Literature in 2006. Its publishing industry is known to be large and diverse and there are increasing links with publishers across Europe. UK book sales have grown 31 percent over the past five years and more British writers are appearing in Turkish than ever before. Contemporary Turkish literature is varied and strong, and we certainly feel that more of Turkey’s excellent writers deserve to be read and enjoyed in English.

Very few Turkish titles get translated into English. What do you think is the reason for this?

Despite the growth in the Turkish publishing industry and the strength and depth of contemporary Turkish literature, numerous excellent writers are almost unknown in the English-speaking world. Many of these Turkish authors have been translated and published with success in a dozen other European languages as well as Arabic, Japanese, Korean and some of the languages of India, but are still not available in English. The Market Focus program will be supported by an exciting series of public events across the UK featuring Turkish authors, curated by the British Council. The London Book Fair and The British Council hope these events will help create a stronger and deeper literary exchange between the UK and Turkey.

Why should Turkish publishers take part in the LBF?

The Turkey Market Focus will give unprecedented access to the global publishing marketplace that is the London Book Fair -- there is currently representation from 110 countries at the fair -- and the UK publishing industry, which is one of the biggest in the world. There will be a number of networking opportunities organized at the fair, with a view to creating deeper business links between Turkey and the world. With Turkish publishing thriving, publishers and authors from Turkey will not want to miss out on the exposure to the wider publishing community that comes with being in the spotlight in this way.

Are any British publishers making any preparations for the Turkey Market Focus?

The Publishers Association -- a key partner of the London Book Fair -- has said Turkey becoming the Market Focus “presents UK publishers with a fantastic opportunity to learn more about mutually beneficial opportunities; to strengthen relationships with the Turkish book trade and to share lessons and experiences, particularly in the digital space.” We expect UK publishers to seize this opportunity, as they have done with previous Market Focus partners, to network and do business and to forge lasting relationships with Turkish publishers who attend.

What kinds of events are scheduled for the 2013 fair?

We will not be publishing the program of events until nearer the fair. In previous years there have been many professional publishing forums, which [should also] encourage professionals from Turkey to network and discuss the publishing market with their international counterparts. There are also cultural events which serve to raise the profile of Turkish authors in the UK and to the global publishing audience.