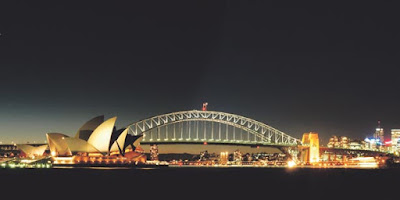 This is a nation whose homes are surrounded by an abundance of trees. When you look down from above, you see almost nothing but the green of the trees. From the ground level, the same sort of beauty continues as far as the eye can see. This bright green dream of Australia then turns into a gorgeous blue world where the land meets the shore. The Australian landscape is diverse. In stark contrast to the green and blue of the coasts, the Outback spans a vast, desolate and dry land. On one side of this continent is the Indian Ocean, and on the other side, the Pacific. This is the other end of the world.


Australia is not a place that you can simply set out for on a whim -- at least, not if you are starting off from Turkey. After all, this is a location that you can only reach after a 20-hour flight from Turkey. Of course, even just the dream of this paradise that awaits you at the end of this long journey is enough to shrink the distance and make you excited like a child. Our reason for being here, the International Turkish Language Olympiads Australian finals, is really a wonderful and very meaningful occasion. This chain of love, which was first ignited in Anatolia and then spread across the rest of the world, was now awaiting us in Australia.

The Turkish Language Olympiad’s Australian finals took place last week in Sydney. The event was staged at the Parramatta Riverside Theatre, in the geographical heart of this city that is known for its cultural and artistic events in general. The sheer energy and excitement surrounding these finals was well worth seeing. Guests came from all around the world. We listened to stories from volunteer teachers; some were stories we had heard before, but never in person. Most of the time, these stories filled us with a certain longing.

Let’s start off with a description of these Turkish Language Olympiad Australian finals first. The story of the country we were visiting will wind up pulling us in anyway. On the actual day of the finals, students and their families and friends from the Sule College and Isık College, which are part of the Feza Education Foundation and the Selimiye Foundation in the cities of Sydney and Melbourne, respectively, crowded into the theater. They were also joined by ambassadors, journalists and other esteemed guests.

On setting foot into the theater we couldn’t help noticed the sheer joy on the faces of the students participating in this event. The pride and joy that everyone here felt for their schools, which have connections to Turkey, was plainly evident. After all, both teachers and students had worked long and hard to be here. And now, after so many months of work, these young students finally had the chance to show off their skills, competing for the opportunity to attend the world finals in Turkey.

The poetry, songs and folk songs performed by these students, young people that reflected all the colors of the world, began in an almost dreamlike atmosphere. Of course, the tears of joy and the inevitable sadness and disappointments that emerged from these finals definitely made the work of the jury quite difficult. After all the excitement of this Australian finals event, first place prizes were awarded in various categories as follows: Esra Ahmadi reading “Ey İnsan” in the Non-native Speaker Poetry Reading category; Nilüfer Günler singing “Katip Arzuhalim” in the Native Speaker Turkish Song category; Sevim Öztürk reading “Ey Sevgili” in the Native Speaker Poetry Reading category; Lamisa Haque singing “Potpori” in the Non-native Speaker Turkish Song category; and Asım Cansever in the Composition category. These winners of the Australian finals won the right to represent Australia in the upcoming June 15 world finals that will take place in Turkey, which will be attended by students from 130 countries from around the world.

After awards were distributed to program teachers, students and jury members, all of the students gathered together on stage and brought the Australian final to a close by singing the song “Yeni Bir Dünya Kuruyorlardı” (They Were Forming a Brand New World). The students from Sule College in Sydney, which of course also participated in the competition, added even more beauty to an occasion that was already wonderful. The sheer innocence and joy of these young students awakens a sense of just how universal all of humanity’s experience really is.

In Australia, there are a total of 17 Turkish schools. And the prestige enjoyed by these schools in Australia is substantial. The students studying at these schools are very successful in statewide exams. There is thus much demand for these schools, which add a whole new level of liveliness to the cities in which they are located. In fact, there are long waiting lists of students hoping to get into these schools. The words spoken by educator Mehmet Yavuzlar, a consultant to the Selimiye Foundation and the Feza Education Foundation, summed up the situation quite well on the night of the Australian finals: “When Turkish soldiers picked up enemy soldiers who had fallen wounded during the battle at Çanakkale and dragged them on their shoulders away from the line of fire, this was the language of a certain state. Nowadays, we in Australia comfortably live among other Australians. We are indebted to the actions of the Turkish soldiers back then. Sometimes we exist in this world thanks to the language spoken by our very states, other times it’s with our body language, and still other times the language spoken by our tongues. In the future, we will be even more than we are now.”

All right, so what sort of country is Australia, where this meaningful and deep joy is experienced, and where these teachers do their jobs so well, and without drawing attention to themselves? This is a place where different landscapes merge to form scenes as beautiful as oil paintings. There are around 150,000 Turks living in Australia. The nation boasts a system that puts people at its heart and does everything it can to serve its citizens. You can actually feel this immediately everywhere you go in the city. On the streets, in the parks, in the homes. It is like a deep serenity that calls you. You cannot help wondering what Turkish poet Ahmet Hamdi Tanpınar would have said had he seen Australia. After all, remember what he once wrote: “Ne içindeyim zamanın,/ Ne de büsbütün dışında;/ Yekpare, geniş bir anın/ Parçalanmaz akışında” (I am neither contained by time/ Nor am I entirely outside of it/ Entirety is a wide moment/ In the undividable flow of things).

We share a history with Australians. Because of all the many Australian and New Zealand soldiers who came, fought and died on Turkish soil in World War I, every year hundreds of Australians and New Zealanders come to visit Çanakkale and remember their fallen soldiers in a special dawn mass. The result of this is has been the strengthening of ties between Turkey and Australia. Some cities have a draw that follows you like a shadow everywhere you go. There are lots of Australian cities like this. What was it that the Greek poet Constantine P. Cavafy once wrote, “This city will always pursue you.”

The land of the Aboriginal people

Australia’s land mass is around seven times larger than Turkey. The original inhabitants of Australia are the Aboriginal people, also known as Indigenous Australians. It was just over 200 years ago when the first people from England came to Australia, and were followed later by people from many other countries. Locals often refer to themselves as “Aussies.” There are six states and two mainland territories in Australia. Many Turks live in the cities of Melbourne and Sydney. Living standards here are considered quite good. In fact, the opportunities offered by the Australian government for its citizens are surprising. The unemployed receive welfare payments, there is a payment for newborn children and there support payments for education expenses. All the state asks in return is transparency on the part of its citizens. As long as you pay your taxes and respect the law the path forward remains open for its citizens.

Life is particularly lively in Australia’s oldest city, Sydney. The Sydney Opera House and the Sydney Harbour Bridge are two architectural masterpieces that help define the city’s character. In fact, the Opera House is one of greatest architectural feats of the 20th century, not to mention one of the most famous. It was built by Danish architect Jorn Utzon, who was awarded The Pritzker Architecture Prize in 2003. What’s more, the Opera House is listed as a UNESCO World Heritage Site. You can see all the fine details of this magnificent structure when you get up close to it.

As for the iconic Sydney Harbour Bridge, it stretches like a beautiful pendant across the waters of Sydney harbor and is one of the widest bridges ever built from steel. The district around these two unforgettable structures is with business centers and hotels. Sydney is a city where a visitor could spend a long time simply touring the many art galleries and museums. There are lots of surprises here. The street music you can hear played by Indigenous Australian performers here is one of those pleasurable surprises. In fact, Australia knows how to showcase the folkloric culture it has. There are many of Aboriginal-inspired items that you can pick up, including musical instruments, boomerangs and the famous “didgeridoo” (a traditional long wooden wind instrument). It is important to note that the indigenous people hold a very special place in Australia.