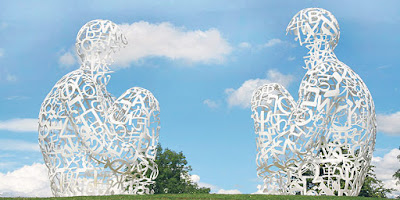 As Hasan Ali Toptaş has said, the awareness of mankind extends only to the sum of what they have seen, and is closed to the eternity of what they have not. Toptaş is correct: Awareness is awakened by what is made visible to a person, therefore art reflecting something alien or something from afar often has the ability to render its audience awestruck. It isn’t easy to imagine such an impact from the union of plastic arts and literature, for example, but some spectacles have the power to rouse people from their slumber.

Catalan sculptor and artist Jaume Plensa, an anthology of whose works is currently on show at the Yorkshire open-air Sculpture Park, is renowned for erecting giant sculptures in public areas, and is an artist primarily interested in human cultures and writing systems. Latin, Greek, Hebrew, Cyrillic, Arabic, Hindi, Japanese, Chinese… he gathers all the languages of the world in a single piece, fusing and merging them with the poems of renowned poets such as Shakespeare, William Blake, Baudelaire, Goethe, Edgar Allan Poe, and T.S. Eliot.

A sculpture of a human body made up of letters greets visitors at the threshold of the museum. Seeing the alif, the first letter of the Arabic alphabet, reminds me of Ibn ‘Arabi’s saying “The core of every existing person stands as a letter in the knowledge of God.” Plensa’s bodies unify all the letters of the world, revealing their secrets one by one. They are all equal, none oppresses the other and they work as a complete unit. It is therefore hard to perceive where one letter begins and another ends.

‘I feel more intimate with sculpture than poetry’
Plensa was raised in a house full of books, which explains his interest in literature, an inheritance he attributes to his father. Throughout his childhood he discovered letters, words and texts that would be used in his future works. “Although the relationship between painting and writing seems to be close, I think the relationship between poetry and sculpture is deeper and I personally feel more intimate with sculpture,” says the artist.

When he was a child Plensa dreamt of having various jobs. He planned to be a doctor, an author and a musician at different periods. Becoming a sculptor allowed him to blend all of his dream jobs by including aspects of all of them. This job takes in all of his wisdom.

As you move forward through the open-air museum’s landscape you come across bronze bodies hugging cherry trees. Each body represents the body of the artist, and the names of renowned musicians are written on them. Plensa strives to develop a collective memory through his work. He defines himself as an individual who wants to get in touch with ideas, not as a conceptual artist. He praises art as a very important means of understanding life and, although staunchly modest about his own work, admits that this batch represents some of his best. His sculptures are ready to embrace you when you feel tired of this world. “The artist should beautify daily life. That is his or her duty,” Plensa says. And indeed Plensa has succeeded in his aim, creating a spiritual hub for visitors to the museum.

Walking inside the museum, you touch poetry quotations hung on the wall. While wandering through the gallery, visitors take small steps and try to read verses suspended as a curtain, while sunlight casts shadows of letters across the gallery. In another room elongated faces are cut from stone. As you peer at the sculptures, which bear a resemblance to those on Mount Nemrut in Turkey, it begins to feel as though you are waking in the middle of a lost civilization.

In the next room tower three giant faces inspired by a jail letter of Oscar Wilde’s. The words “insomnia,” “disease” and “hunger” -- the ills a prisoner is exposed to -- are tattooed on the foreheads of the sculptures. Next is a piece called “Jerusalem,” which reflects William Blake’s quotation, “One thought fills immensity.” Visitors are invited to strike a circle of suspended gongs: The waving sound of the gongs resembles a scream and reminds us how a poem, thought or idea may deeply influence us and continue to consume us as time passes.

Plensa has exhibited in museums across the world but unfortunately not yet in Turkey. However, one of his works, titled “War, Power and Faith,” is currently on exhibit at Ankara’s Museum of Anatolian Civilizations, where it will remain until Nov. 9. Plensa’s show at the Yorkshire Sculpture Park is open until Sept. 25.