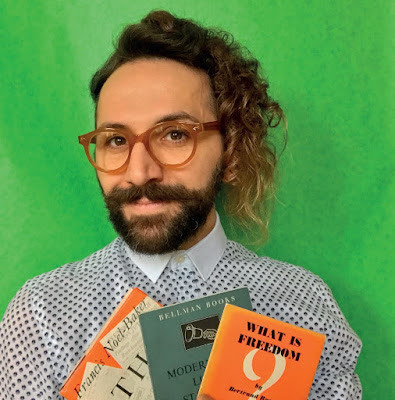 This is an interview with Frances Allitt, from Antiques Trade Gazette, 18 Feb 2019

In the latest of our occasional series of collector interviews, we talk to Musa Igrek, who won the ABA Book Collecting Prize 2018 for his assemblage of secretly funded government-sponsored works during the Cold War. His collection focuses on propaganda of the 1950s and ‘60s and won the £1000 annual prize at the ABA Chelsea Rare Book Fair. Musa Igrek is a PhD candidate at Goldsmiths, University of London.

ATG: Tell us more about these books.
In 1948, the British Foreign Office created a secret unit, the ‘Information Research Department’ (IRD), tasked with promoting Western democracy, contesting Communism and promoting the ‘British way of life’ using all media, including books. Through British embassies, libraries and bookshops, the IRD’s small pocket-sized books were distributed all around the world. George Orwell’s Animal Farm was published in Arabic with the support of the IRD, for example. Within Britain, more than 100 titles appeared across politics, philosophy, economics, and current affairs, published by seemingly independent presses: Ampersand, Batchworth Press, Phoenix House and Bodley Head.

When did you start the collection?
About two years ago during my PhD research. Academically I am interested in the role of culture – mainly books – in foreign policy. My initial interest was in the IRD’s activities overall. Then I realised that these volumes were still to be found in second-hand bookshops.

What was your first purchase?
Bertrand Russell’s What is Freedom? (1952). I was very excited to find it. This one shilling little ‘Background Book’ has a bright red cover with a big question mark in the middle. Russell knew full well that the IRD’s books were surreptitiously funded by a propaganda wing of the Foreign Office and recognised the direct ideological nature of the publications of which he was to be a part. His text was an essential tool for projecting authority and power abroad.

And your top piece?
I have to say that sometimes I judge a book by its cover. The Spy Web (1954) by Francis Noel-Baker is one of the good ones with a cover that reads: ‘Spy stories are always exciting’.
But the cases in this book have a special significance and drama. It is a nicely produced hardcover with a decent dustjacket. The publishers sought to establish the mystery and excitement on the cover and in contrast to other IRD material, the design suppresses any suspicion that this might be an ‘official’ book. It contains four real-life stories and purports to explore the world-wide-web of Communist espionage, centred in Moscow.

What are you on the look-out for?
Those by well-known writers such as Bertrand Russell and Leonard Schapiro are popular, but the IRD published and supported many less-known writers. For me it is significant to identify IRD-funded books and add them to my collection. Recently I have been looking for What Is Culture? by Tosco Raphael Fyvel, How Strong is Communism? by Leonard Schapiro and From Marx to Stalin by John Plamenatz.

What are the challenges in this field?
Booksellers are fully conscious of Soviet propaganda material, of which a large amount was produced, but there is little awareness of material of Western origin. It can take time to explain to a bookseller the story of Western covert propaganda.  It is not easy to identify these books, either; you need to spend time in government archives looking for any titles or lists and other clues that will lead you to the actual volumes.
The state’s involvement in cultural production and the contribution of prominent writers such as George Orwell, Bertrand Russell and Arthur Koestler makes the search a bit of a spy-novel process, which is rather exciting.

You recently won the ABA student book-collecting prize. How will you spend the prize money?
The prize included an exhibition in the Senate House Library in London, which was an excellent opportunity to show some of these books to a wider audience, and after the prize and the exhibition, a couple of booksellers got in touch with me.
I have bought five more books, which were part of series of 14 ‘Bellman Books’ that the IRD supported.

How much do you spend on each book?
It used to be between £5.50 and £25. However, I’ve now received two prizes (I was co-winner of The Anthony Davis Book Collector Prize 2018) for the collection and between the publicity for that and the exhibition at the Senate House Library, the prices have gone up slightly – they are now around £10-45. Books that have ‘Russia’ or ‘China’ in the title can be more expensive as those are popular topics nowadays.

What’s it like being a student collector?
Collecting books can for some be associated with people of a certain generation or age. Sometimes being the youngest person in a book or ephemera fair is advantageous as the booksellers are intrigued to see new collectors and are extremely helpful.

How large is the collection now?
The IRD published more than 100 books and I have already got around 70. However, finishing the list is not an easy job. These are the type of books that bookshops put on their bottom shelves and I need to keep my eyes wide open.  The volumes come from across the world: England, Wales, Ireland, Scotland, New Zealand and the USA and are in a various formats – hardcover, paperback and pamphlet. IRD books also appeared in Arabic, Turkish, Farsi, Spanish and other languages. The next step is finding those translated books, which will not be easy.